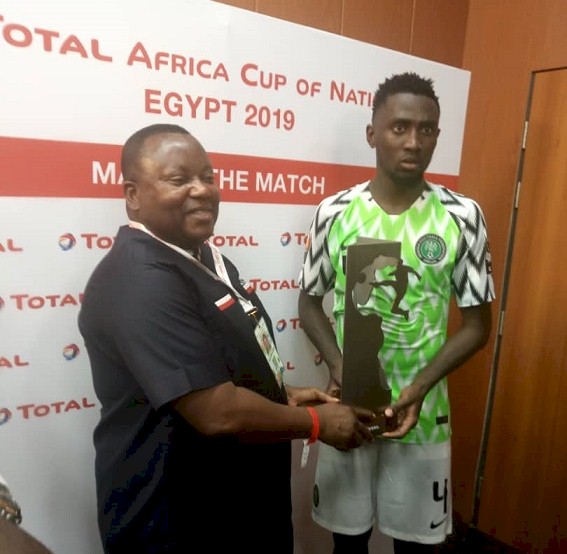 Executive General Manager Corporate Social Responsibility (CSR) Vincent Nnadi has said Total’s sponsorship of the ongoing Total African Cup of Nations AFCON in Egypt is a sign of friendship and a demonstration of the company’s commitment to sports and youth development in Africa.

Mr Nnadi stated this on Saturday, June 22, 2019 in Alexandria, Egypt where he led some staff in the Nigeria affiliate to show support for the Nigerian team, the super eagles who are on their Nation’s cup campaign in the North African country.

Total is a great friend of Africa and we feel obliged to be part of this development, especially for the teeming youths. One area we need to actually do that is in football.The women's tournament is also being sponsored by Total, so we are really involved in the promotion of African football. Africa represents one of Total's major areas of operations,".

The EGM also presented the “Man of the Match” trophy to Super Eagle’s Wilfred Ndidi on behalf of the Local Organising Committee (LOC) of the Egypt 2019 AFCON.

On his experience in Egypt, he said: "It is my first time in Egypt and it is a great discovery to see the level of development in this country. It's an amazing country with amazing infrastructure... I have made friends and I will make sure I move around to explore the environment and see what awaits me in this beautiful Mediterranean city of Alexandria. I would have also loved to visit the great pyramids, he stated.

In 2016, Total and the Confederation of African Football (CAF) reached an agreement with the Total Group under which Total became the official sponsor of the African football for the next eight years. Total supports CAF's ten principal competitions.